Conversion of Beregond. (Part One)

The Archer Captain had so much success around my friends that one of them asked a conversion of Beregond. ﻿Beregond is a noble and honest man, possessed of an unshakeable honour and a sturdy sword arm. He was promoted to the Citadel Guard after many years of dedicated service on both sides of the Anduin with the Rangers of Ithilien. He wears heavy armour and carries an Elf bow and a sword. So, I had to choose an archer and give him a sword. The proper for this task, according to my opinion, was this poor fellow, whom I took from my friend's collection: 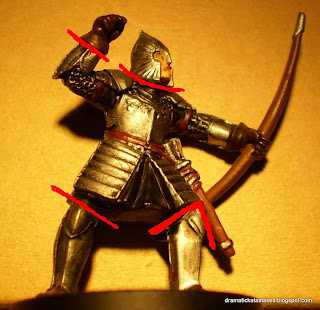 I had to cut ﻿the head, the right hand and the two legs on the spots where you can see the red lines. I took the armed hand with a sword from the below right warrior (Don't pay attention to the archer. This one I will give back to my friend to reach number sixteen again for WotR purposes). 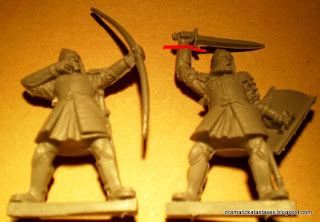 Among the below heads I choosed the right bare head. The left one, although it has long hair, is bigger than the WoMT's. 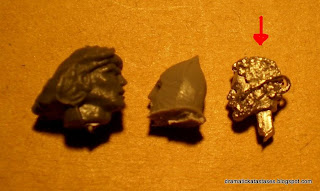 Head and hand were ready to be assembled: 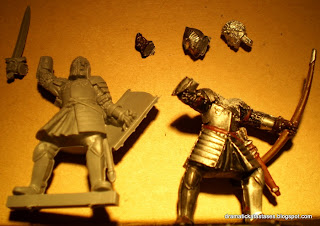 I cut the legs because I wanted to make them longer (After all, he has to be tall as a Captain): 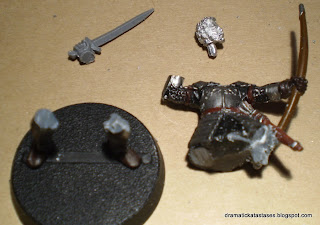 And then, this was the moment of doubt. You see all the pieces and you wonder if you can manage to put them back in order again. I e-mailed this photo to my friend. I am sure it send shivers down his spine! ﻿

I pinned ﻿the hand and the legs to insure that they will stay in their places during the battles. I did the same with the head: 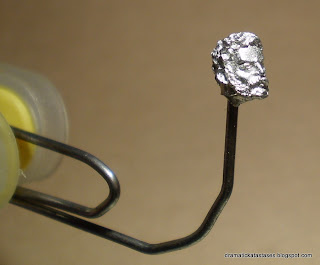 I faced a little problem with the archer's sword. Beregond holds his sword in his hand, so he can not have a second one in his scabbard. I had to get rid of it. 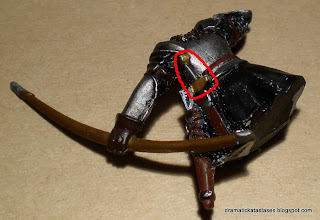 And I did. I also opened a little hole on the scabbard and a big one on the torso to place the head: 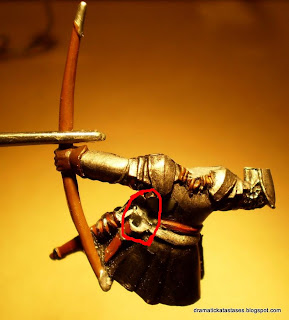 I put the head in its place and I opened a hole on the right wrist joint: 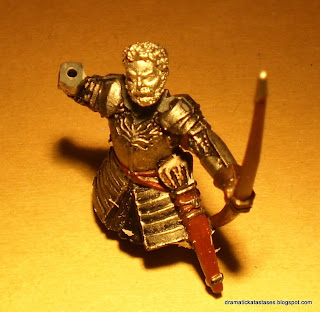 I put the hand in its place. At that moment the result was a relief. I knew I was on the right way. 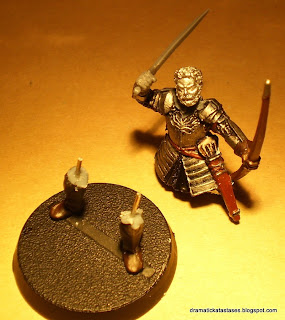 Whenever you have two pins it is easier to paint them a little first with red colour and afterwards touch the place you have to drill. This prevents you from making useless holes around. 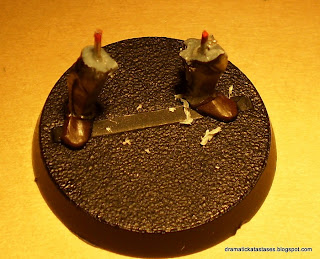 And finally Beregond stood on his own feet: 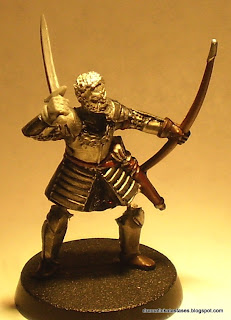 Below I compared his height to Boromir's and to one of his warriors. Beregond has the proper height for a Hero. 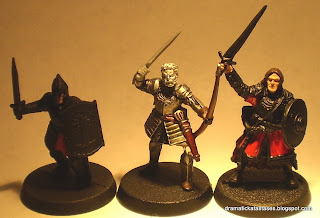 It is obvious that he is taller than a simple WoMT: 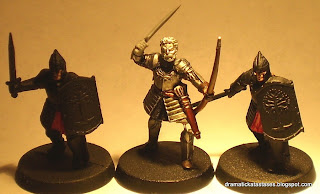 That's it for today. I will use greenstuff to make his tunic, his cloak and to make his hair longer. So please stay tuned for Part Two.
Posted by dramatic katastases at 2:25 PM