The Dunlendings are savage tribesmen, the ancestral enemies of Rohan. A barbaric and uncivilised race of Men, sturdy, strong fighters, formidable soldiers on the battlefield, who thirst for vengeance. During the War of the Ring they readily join forces with Saruman in the hope of ousting the Rohirrim and recovering their lost lands, the hills to the west of Rohan.
The Dunlendings are a nice colourful formation on the battlefield among the dark and monotonous Uruk-hai warriors, but an expensive one for someone who would take the decision to buy so many blisters. Fortunately, a friend of mine gave me a mountain of plastic Rohan warriors (foot and mounted) as a gift and that was my opportunity to acquire my feral warriors of Dunland by converting all of them to Dunlendings. Below you can see the first gathering of the whole formation of the savage warriors of Dunland:
﻿ 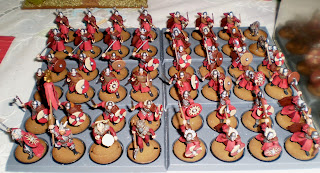 The command unit has a captain, a banner-bearer, a drummer and Thrydan Wolfsbane as a hero. The Captain is Gamling, the b-b is Golfimbul on foot, drummer is a free Warlord games ECW soldier of WI 258, while Thrydan is the second free Perry miniature Rifleman of WI 260. 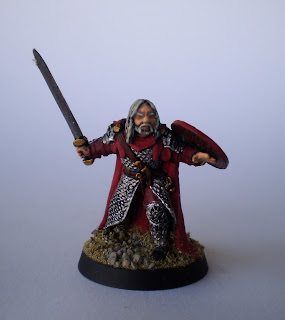 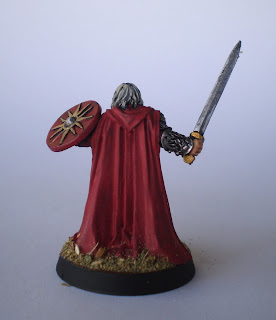 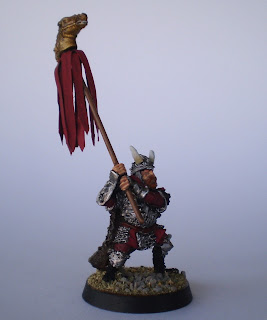 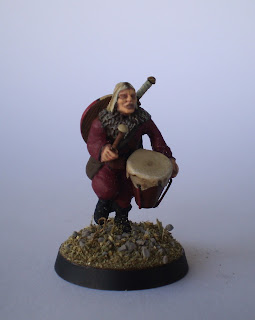 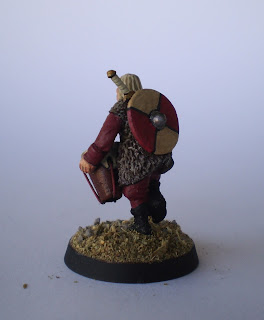 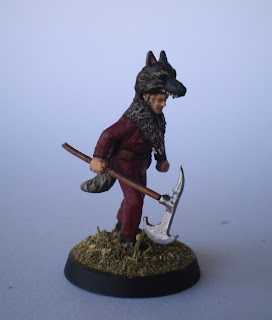 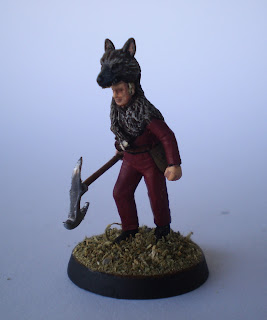 What do you see here. Gamling gained only a Rohan shield and that's it. Golfimbul has a similar flag with that of the Dunlending horseman b-b. Drummer has the top of a plastic blue pen cover as a drum,  aluminioum foil as drum skin and a pin for drum stick. Finally, Thrydan has as a hat the head of a plastic wolf D&D miniature and fur coat made of green stuff. So, the whole command unit is the following: 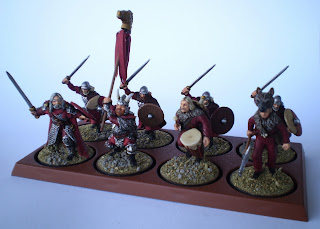 ﻿
The ﻿rest five units of the formation are Rohirims, who are painted with dark red colours and   are armed with war axes instead of the Rohan spears. The majority of the axes came from some old Minifigs Varangian guards miniatures which I bought long time ago, as below:

Additionally, I kept the shields which are decorated with stars as they are, while I removed the embossed horses from the rest and I painted them with Viking patterns. Furthermore, I turned some of the shields inside out to bring the wooden surface to the front. 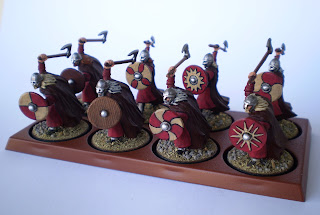 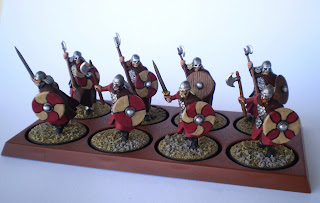 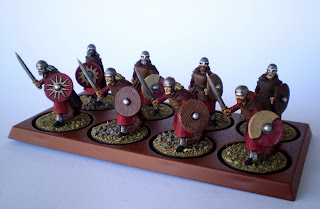 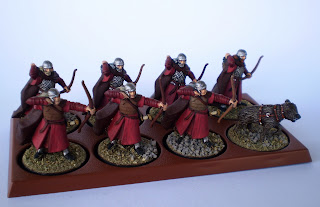 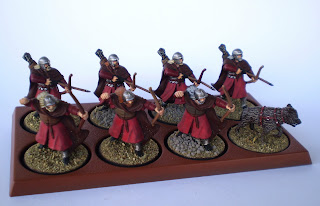 Finally,﻿ I was two miniatures short to dress all the lines because I had used already some miniatures for the Dunlending Chariots. So, I added two D&D hyenas for even wilder appearence of the formation. 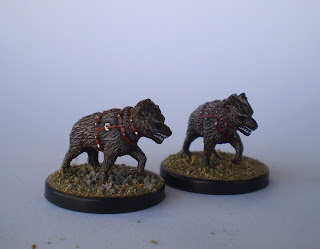 ﻿
Posted by dramatic katastases at 8:17 PM