The twenty Warg Riders are still in the box! Untill now, I painted the ground (flat earth), added some rocks, which I made of greenstuff and painted them grey (neutral grey). I divided the wargs into four groups of five and painted each group with different colour. I started also to paint all the wooden equipment, such as shields, spears, arrows, etc, the same colour (cork brown) and finally I repainted the faces with Graveyard Earth as the base colour. I did not really like the previous look of their faces, so I will paint them from the beggining and this time I will paint the eyes as well. Below you can see all the wargs in their box, grey ones in the first row, yellow-brown in the second, red-brown in the third and brown in the back row: 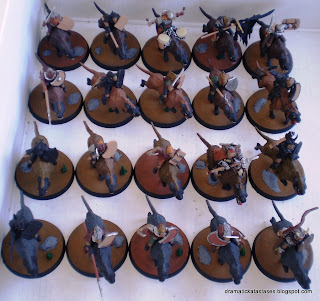 Another thing that I changed, beside the colours, is the flag of the banner-bearer. That flag was not exactly what I had in mind when I converted one of the archers to a banner-bearer. Back then, I changed his left hand which held the bow with another one which carried a shield. I made the flag of greenstuff, the pole was a pin and the spearhead belonged to a Uruk-hai pikeman. The final result was not so nice. Furthermore, during the games it was not noticable that this was the miniature which carried the banner. He looked as a simple spearmen more than a banner-bearer. But since every problem has a solution, in this case a solution was to remove the greenstuff flag and make a new one. This time I used the usual aluminium foil instead of the greenstuff. I think the result now is far better than the previous. Below you can see the old and the new flag: 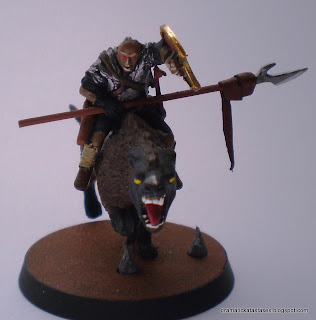 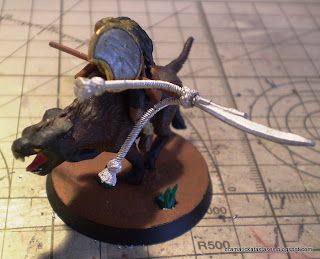 The new spearhead and the finials 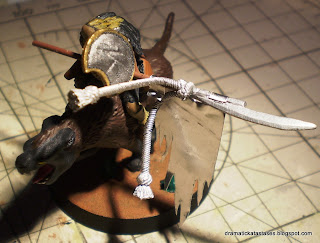 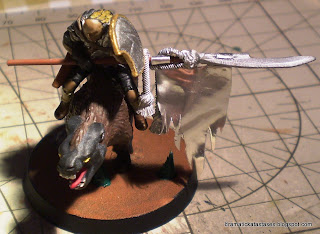 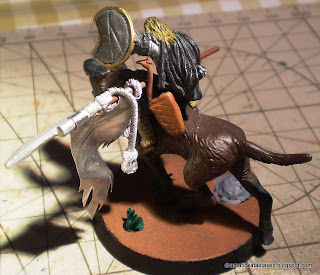 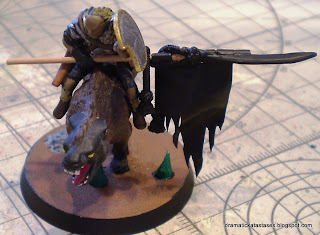 Primed and ready for painting

The above spearhead is an old Ral Partha Minotaur's weapon while the flagpole is the same pin. I wanted to make the flag noticable from all over the battlefield. For this reason, the flag had to be painted with bright colours. But orcs can not have such colours! So, the flag had to be a trophy! I will paint the flag with the same colours I used for the SKoDA banner. Now you can understand the reason why I added the finials.   ﻿ 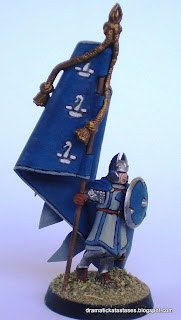 That's it for today. Stay tuned for more.﻿

Posted by dramatic katastases at 8:56 PM