My new project is an army of famous Mordor Warg Riders. The army consists of twenty mounted orcs, among whom there are named heroes, such as Gothmog and Golfimbul, a shaman, a taskmaster, a kettledrummer, a banner-bearer, spearmen and swordsmen.
I plan to divide the mounts in four groups and paint each one of them with different colours to avoid the monotony of the brown warg pack. The army does not have archers. I used the warg rider archers' upper body to increase the number of my orc archers on foot, while the lower parts were used to convert the captain, the kettledrummer and the banner-bearer. The taskmaster is a conversion as well. I used a second mounted Golfimbul for this reason. Anyway, he is fat enough to be a taskmaster!
You can see the twenty warg riders on the photo below. There you can see also the Orc Captain "The widowmaker" and Golfimbul on foot. I converted the second Golfimbul on foot to a Dunlending Warriors banner-bearer.
I have some of the Warg riders for a long time but I never managed to complete their painting scheme. I used them in games as you see them, half painted. Some months ago, I bought another box to make the Orc Chariots, so four more wargs were added to the army (they are the black ones on the following photo). Now I have to paint all twenty of them. I will show this painting procedure step by step in the next posts with a few words about the conversions. In the meanwhile, I am waiting some beautiful cataphract horses that I have ordered for another project, "The Khandish Chariots". At the same time my based Goblins are on the queue for painting. Too many things to do, no rush and I will manage them all! 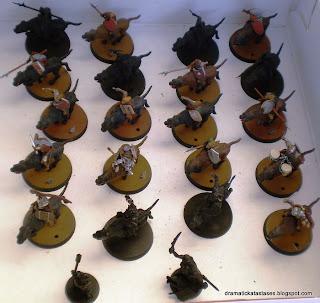 The whole wargpack in a box! 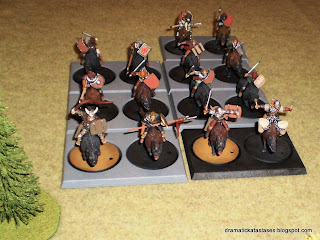 Warg riders charge under the sound of kettledrum.

A WotR Mordor army (wargs are on the far left).

The unlucky opponents of the above army.
﻿
That's﻿ it, stay tuned for more.
Posted by dramatic katastases at 6:58 PM