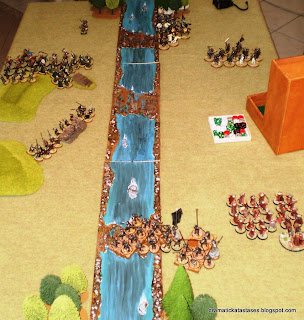 The history
During the War of the Ring there were two battles at the Fords of Isen. The first took place on February 25, 3019 of the Third Age. The second was on March 2, of the same year. The battles were between Saruman's Uruk-hai and the Rohirrim of Rohan.
First Battle of the Fords of Isen:
Théodred, son of King Théoden of Rohan, was alerted by his scouts to the mustering taking place in Isengard. He manned both sides of the ford and went forward leaving three companies of riders to guard the eastern side. Early in the morning, he crossed over to the western side with a force mainly consisting of archers and cavalry. He planned to take the forces of Uruk-hai by surprise.
However, Saruman had tricked the scouts; his army was already marching out to attack the ford. Twenty miles to the north of the ford, Théodred encountered the vanguard of the Uruk-hai and quickly cut through their lines. He then charged at the main force, who were prepared for the attack and were stationed behind trenches planted with pikes. Reinforcements came out of Isengard and outflanked the cavalry, nearly surrounding them. Hastily Théodred ordered a retreat, but the Uruk-hai could not be shaken off that easily. Grimbold, who was in command of the Rohirrim rearguard, had to cut down their pursuers many times.
Saruman's eastern force was much smaller but more dangerous. It contained mounted Dunlendings, Warg riders, and Uruk-hai. The Rohirrim guard on the eastern side of the ford had been driven into retreat, and their attackers recrossed the ford to attack Théodred on both sides. Théodred and his men had dismounted on an islet to cover Grimbold's retreat. At the same time Grimbold's force was being attacked from the western side, and as Grimbold looked east, he saw Théodred's force being driven from the islet to a hill. Grimbold and a few men raced toward Théodred's position. Théodred was cutting his way through the Uruk-hai lines. But by the time Grimbold reached him, Théodred had fallen, cut down by a giant orc. Grimbold slew the orc and then found himself defending Théodred's body from orcs. He himself would have been killed had it not been for Elfhelm.
Elfhelm had been leading four companies towards Helm's Deep, when it was reported to him that two Warg Riders had been spotted. He rode at full speed to the ford and, seeing the situation, ordered his men to charge. Before long his men held the western side of the ford. They then charged on the islet. From this surprise attack most of the Uruk-hai retreated toward Isengard. When they reached the islet they found Grimbold defending Théodred's body against two huge orcs. Elfhelm rushed to his aid and felled one orc while Grimbold slew the other.
When they lifted Théodred's body, they found he was still alive. He lived long enough to say, "Let me lie here - to keep the ford until Éomer comes." The enemy attack ended by nightfall. The Rohirrim had held the ford but suffered heavy losses and were now leaderless.
(The above text is taken from Wikipedia, http://en.wikipedia.org/wiki/Fords_of_Isen)
The game
The armies that we used to represent the fight were the following:
Rohan army/Grimbold (525 points)
Rohan cavalry/Erkenbrand (525 points)
Orc Patrol (348 points)
Dunlendings (360 points)
Uruk-hai force (350 points)

We placed the forces on both sides of the river. As you can see below, the Orc patrol is on the right corner of the table, the Rohan cavalry on the left, the Rohan army on the right centre and the Dunlendings and the Uruk-hai (and two hands!) on the far left corner. 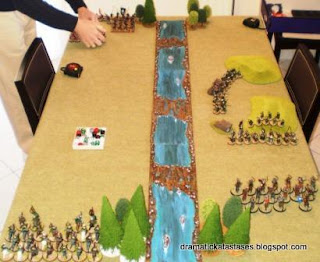 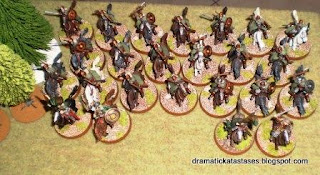 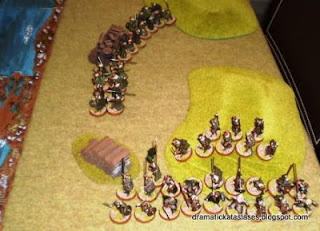 Rohan army on the hill 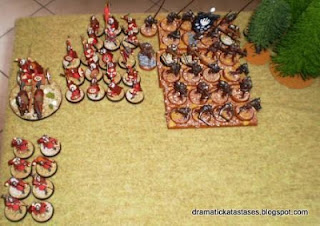 At the beginning of the game the Orc patrol Warg-riders attacked the Rohan army on the hill while the Rohan cavalry released their arrows on them. In the meanwhile, the Dunlendings and the Uruk-hai marched ahead to face their enemies. Unfortunately for the evil forces, the patrol was engaged too soon with the majority of the enemy force. That was a mistake and as expected, the patrol was defeated and destroyed. 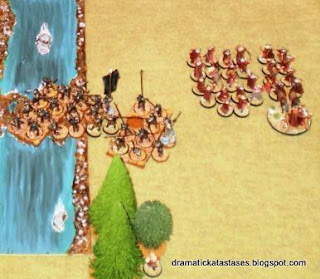 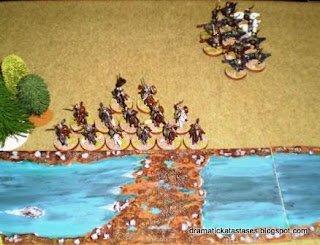 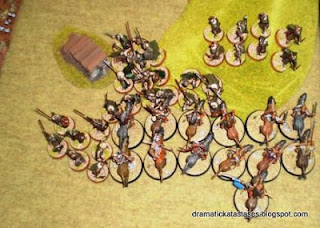 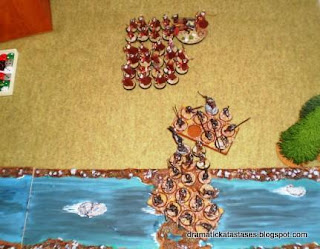 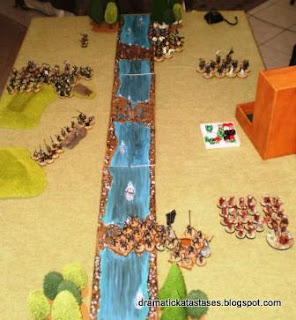 A panoramic view of the battlefield 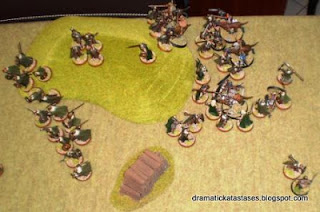 When the Orc patrol Warg riders were reduced a lot, the Rohan cavalry turned to attack the Dunlendings.  Another mistake for the evil force was that the Dunlendings were split from the Uruk-hai force. So, a 360-points unit alone tried to stop a 525-points one! It was impossible! It is all about maths! 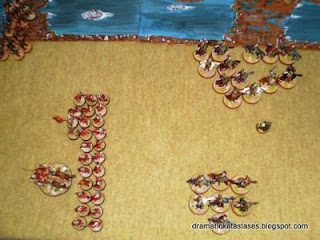 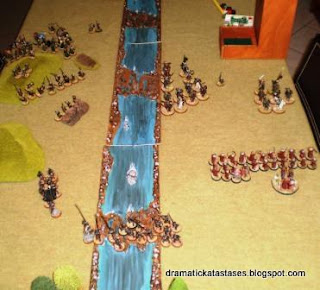 Although the Uruk-hai force tried to attack the Rohan army they changed their minds and turned to support the Dunlendings! It was too late though! At that point the repeated wrong decisions turned the tide and it was clear that the Rohirrims would be victorious. 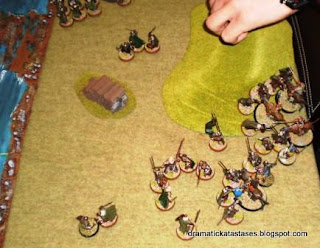 On the right corner the fight was in full swing! But, it was a matter of time for the Warg riders to be eliminated. Failed courage tests helped this a lot. 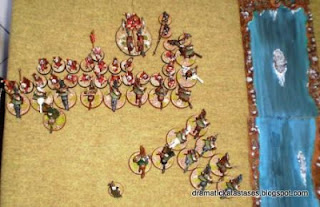 The clash between Dunlendings and Rohirrims was tremendous! Thrydan wolfsbane killed Erkenbrand with his Mighty Blow special rule and gave the last hope to the evil forces until the moment the infantry of Rohan turned against them. 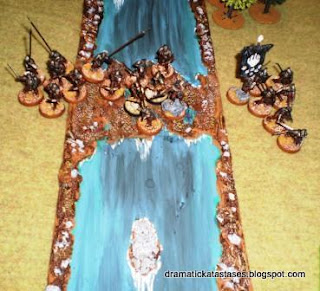 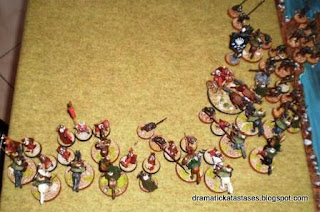 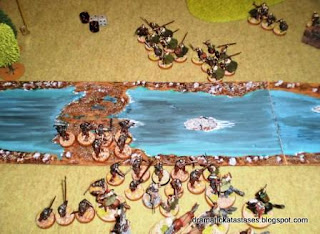 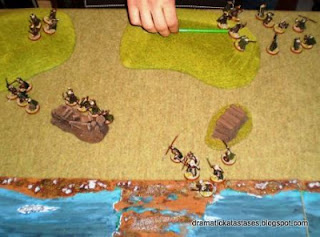 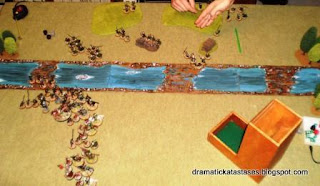 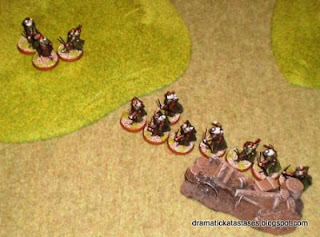 The archers continued to shoot 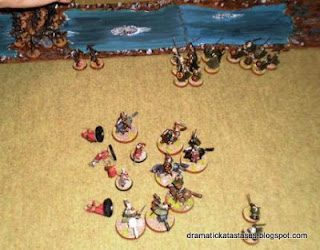 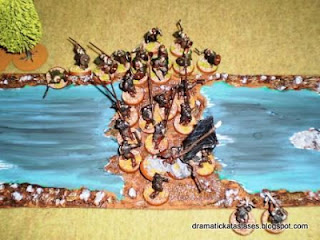 Uruk-hai continued to hold the passage, in vain though...

At this point we stopped. Uruk-hai survived but the day belonged to Rohan!
That's it for today! Stay tuned for more!

Posted by dramatic katastases at 8:33 PM