The three chariots start to take shape. I did a few changes to the initial plan, for example, I did not use the 35mm film plastic tube, nor the balsa wood. I took some photos and I will try to explain step by step what I have done so far. Below you can see the chariots as they are at the moment:

Let's start. When I placed the mongol horses on the GW bases, a problem occured. Bases of one of the two types of horses extended from the round GW base. To face this problem I had to cut the metallic bases, which I did and now only the front foot of these horses extends. The result is not bad at all, I think.  ﻿ 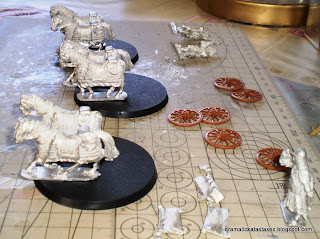 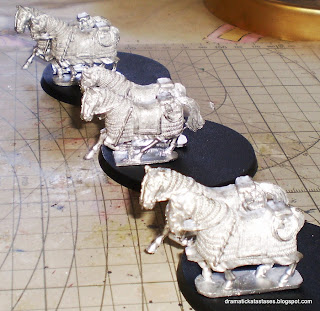 As I have already said, I did not use the film tube. Instead, I used a couple of plastic gum boxes. These boxes became the chariots. I cut the box 1cm from the bottom and then I split it into two halves. 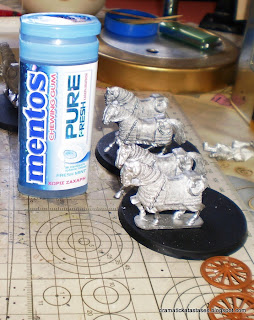 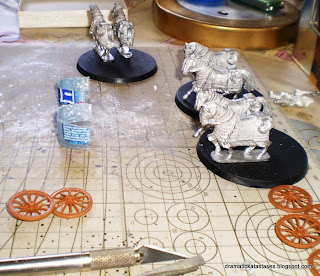 I used another plastic gum box for the king's chariot. This one I cut 2cm from the bottom and because I needed just one chariot this time, the vertical cut was not exactly in the middle. So the king's chariot is a little bit longer than the previous two.  ﻿ 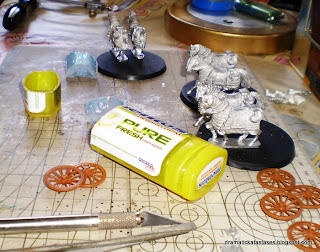 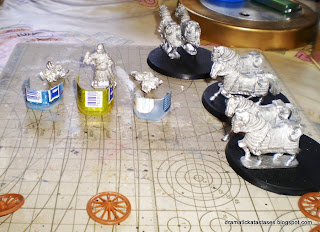 Then I drilled holes on the chariot frames to place the axes. The axes are paper clips which I cut at proper size, around 3cm.﻿ 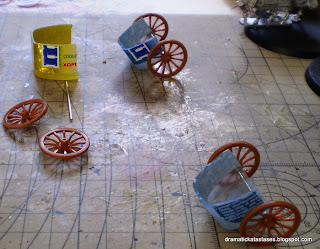 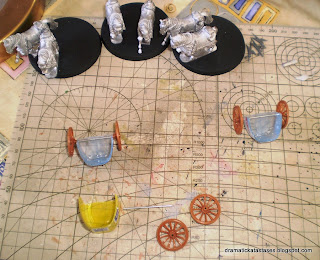 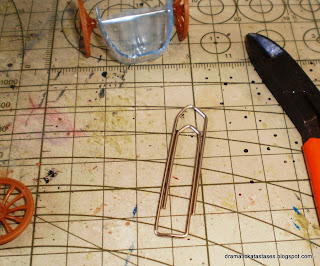 ﻿   When I glued them, I had to place them at proper height, for the wheels to be glued at the right position. I used a couple of tools as supports for that reason. 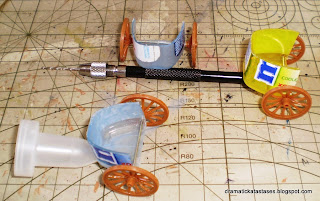 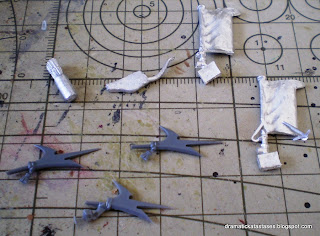 Various objects to decorate the chariots﻿

I used three metallic rods for the chariot poles, which I decorated with halberds' tops. I will not make yokes but I will place the poles at the right height by using some pins.

Finally, I cut the bases from the three warrior miniatures, drilled holes on their feet  and placed pins. Pins will keep the warriors stand inside the chariots. I will make an extra infantry base for the king because I have only one such miniature. So, I will not glue him on the chariot to be easily removed and put on a 25mm base.

That's it for today. Stay tuned for more.﻿
﻿
Posted by dramatic katastases at 7:14 PM