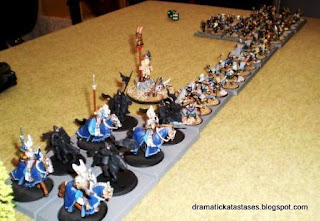 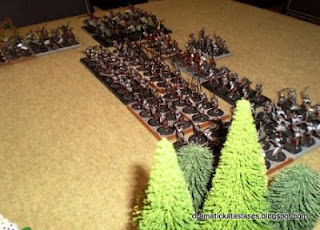 
King’s Champion
Since the day that WotR rulebook was released, two challenges appeared in front of my eyes. First, to increase the numbers of troops for every army I had (an expensive challenge) and second to fill the blanks of the unreleased characters and heroes (a  creative one). One very interesting character is King’s Champion. I imagined him like a very strong and wild dwarf. I tried to convert a Dwarf Warrior but the result was not exactly what I had in my mind about him. So, I took an old miniature of a Dwarf Slayer and I gave it a touch of LotR to bring it closer to this game. 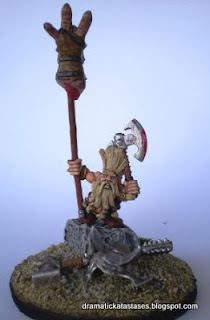 What I have done? I replaced the banner with a troll’s hand and I set some dead troll’s gear in front of Champion’s feet. To remove the troll’s hand from the battle hammer was easy, on the contrary, to remove the head from the helmet was hard.

At the end I was so satisfied about the result that I decided to make another one. Anyway I had a blister with two of them. So, here is the second Champion in all his glory! 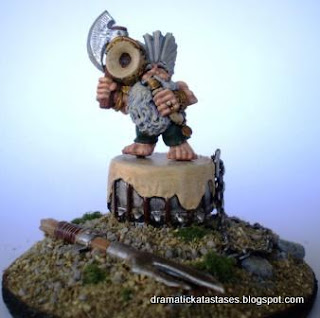 For this one I used troll’s drum to give height to my Champion and I cut the Isengard spear in pieces to add battle flavour to my miniature.
Finally, I can say that these two can stand by themselves alone, like small size dioramas.
Posted by dramatic katastases at 2:13 PM