Mauhúr is an Uruk-hai Captain, an instinctive, merciless and relentless hunter. His warband of Marauders are almost completely tireless, able to cover great distances at speed - once the prey is in their sights, there can be no escape. Mauhúr wears armour only across his torso, as well as armoured boots, and a short cloak.
The original model is very nice but is a finecast one. I have the blister of Shagrat and Gorbag, the kit where Shagrat holds the Mithril coat. I don't really like this Shagrat model version. I think it is very short for such a famous Hero! On the other hand, Shagrat War Leader model has the proper height according to my standards. So, the problem solved - I found my Mauhúr! 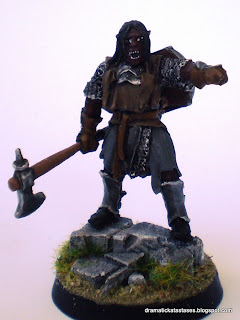 I changed the Mithril cloak with a war axe and I gave him a Numenor Warrior's shield. As a named Captain, he has to distinguish among his Marauders! His height doesn't help, so I placed him on some ruins! Mauhúr now is ready for raids! 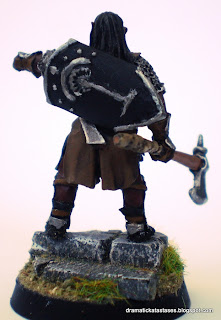 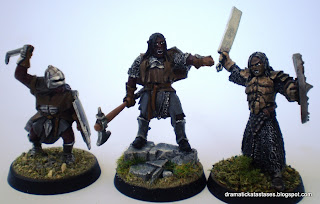 And of course the "family photo" of all the Uruk-hai Captains! From left to right: Ugluk, Vrasku,  a no-named Captain and Mauhúr! 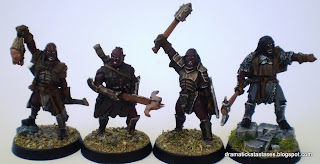 Posted by dramatic katastases at 8:50 PM

Email ThisBlogThis!Share to TwitterShare to FacebookShare to Pinterest
Labels: Isengard