Only terror and death await those who travel to the lands of Moria. Dark creatures plague this land, ruled over by Goblin Warlords, Shamans and monstrous Trolls.
Moria was the name given by the Eldar to an enormous underground complex in north-western Middle-earth, comprising a vast network of tunnels, chambers, mines and huge halls or 'mansions', that ran under and ultimately through the Misty Mountains. There, for many thousands of years, lived the Dwarf clan known as the Longbeards. The name given to Moria by the Dwarves is Khazad-Dûm, which means "Delving of the Dwarves". For over a thousand years of the Third Age it was widely known as Moria, "Black Chasm" or "Black Pit", from Sindarin mor="black" and iâ="void, abyss, pit".
I wanted an opponent for my Dwarves. Thus, I decided to built an army of Moria. So far, I have ten heroes (a King, captains, shamans, etc) and eighty warriors/monsters (goblins, prowlers, cave trolls, spiders, wargs, etc). My newest Moria creatures are the following: 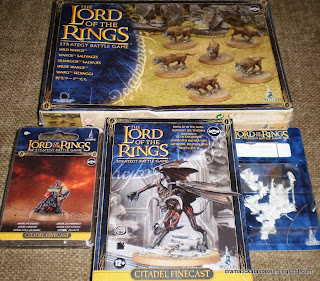 In my mind, I imagine Moria as a dark place full with ruins and debris. That's why I tried, for the first time, to make unique decorated bases for each one of my Moria creatures. As a base material, I used cork of two different thickness (1mm and 2.5mm). Sixty five miniatures, which are the majority of the army, have 25mm bases. I started to decorate them first. Here is the result so far: 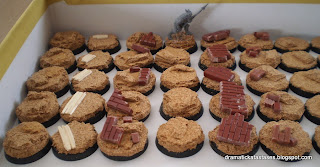 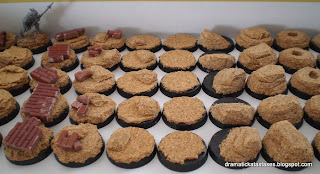 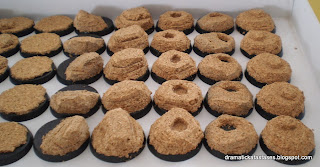 As you can see, the first ﻿goblin warrior stands on his base! I used as Goblin King an old Ral Partha miniature. It must be twenty years old. To distinquish the King from the rest warriors I put him on a bottle cork, which I decorated with a chain and a skull. I also gave him a Dwarf shield as a trophy from previous battles. (With the King ready, I have another 63 to base!): 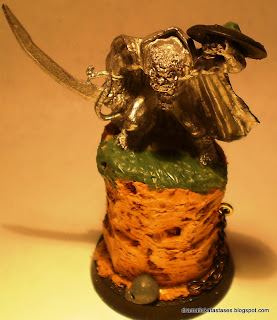 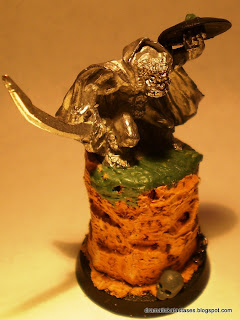 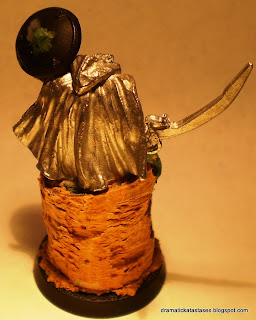 That's it for today. Stay tuned for more.﻿
Posted by dramatic katastases at 10:03 PM