﻿   In the year 2790 of the third age, the exiled Dwarven King Thrór, heir of Durin, attempted to re-enter his ancestral home of Moria. King Thrór wandered alone in Moria and was slain by the Orc chieftain Azog. This murder precipitated "The War of the Dwarves and Orcs" culminating in a bloody battle outside the eastern gates of Moria nine years later.
In T.A. 2799, the final battle was fought in the valley outside the eastern gates of Moria, the Battle of Nanduhirion or Azanulbizar as the Dwarves called it. It was later said that the memory of that battle still causes "Orcs to shudder and Dwarves to weep." The battle initially went against the Dwarves, for the Orcs had the high ground and greater numbers. It was a dark winter day, so the sun did not bother the Orcs. The tide was only turned when a last contingent of fresh warriors from the Iron Hills, led by Náin son of Grór, arrived to reinforce the wavering Dwarves. Azog was slain by Dáin Ironfoot, son of Náin, and his head was stuck on a pike. The Orc-host suffered vast casualties with some 10,000 killed and the remainings routed. The Dwarves were victorious and Azog himself was beheaded before the great Orc could reach the safety of the gates. The Dwarves though had suffered great losses and remained unwilling to face Durin's Bane (Balrog).
Casualties were so high that the Dwarves were unable to craft sufficient crypts for their slain, as was their wont, and were forced instead to burn their deads. The felling of trees to accomplish this task was so great that the Valley of Azanulbizar (the "Dimrill Dale") was forever deforested.
We played this battle many months ago, but I found  the photos recendly. So, I am posting it although I don't remember exactly the participants and the sequence of the fights. We used plastic square plates for the Moria ground and the corridors while the rest (white fabric) was the abyss.
When the game started, Dáin Ironfoot and Vault wardens managed to block the corridors. After that the rest Goblins were an easy target for the ballista which turn after turn hit them hard and reduced their lines. In the meanwhile, a Rangers Sentry noticed the assaulting Orcs and rushed to save the Dwarves from an attack to their back. 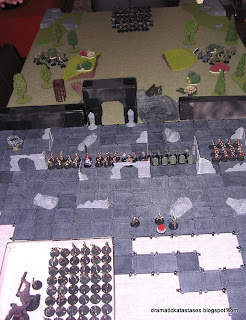 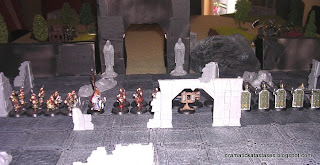 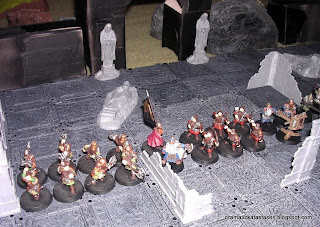 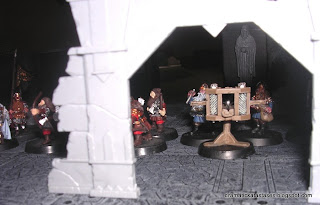 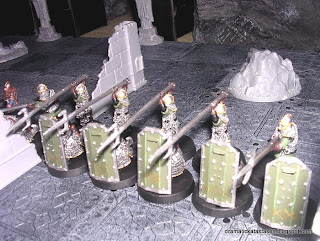 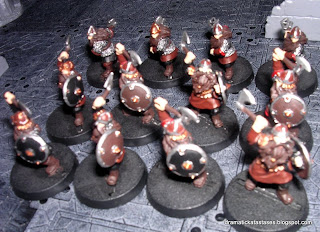 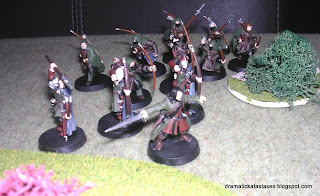 The Rangers (Aragorn miniature is just a Captain) 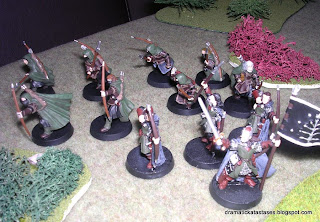 The rest of the Rangers Sentry 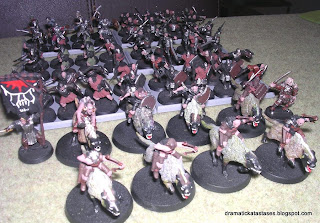 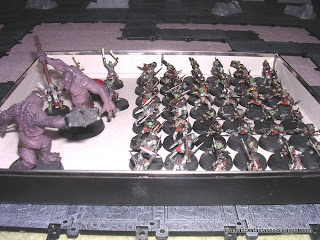 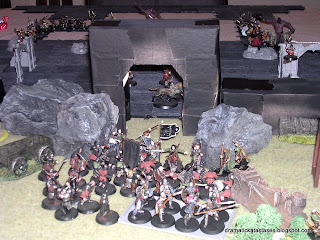 The fight for the Gate 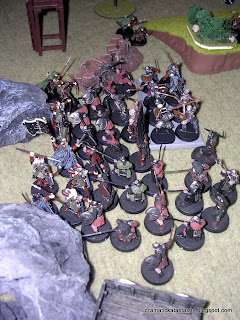 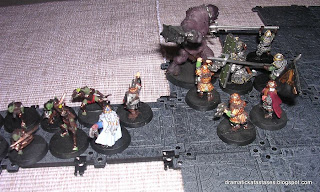 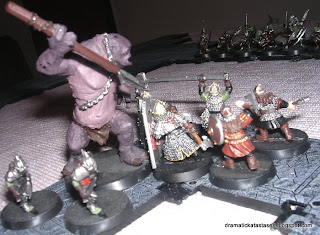 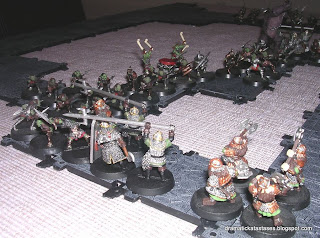 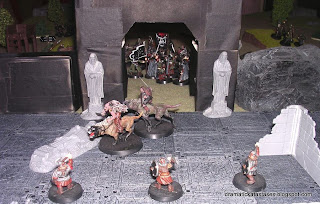 Only two Orcs managed to enter the gate of Moria. They had the same luck as the Goblins who crashed on the defending Dwarves. Finally, the Dwarves were victorious, although they suffered huge casualties, as in the real story. It was just another Pyrrhic victory﻿!
That's it for today. Stay tuned for more!
Posted by dramatic katastases at 9:54 PM